Disclaimer: This game is undergoing rapid development despite not being early access.  Some of the mechanics and descriptions that follow might not exist in the current product.

A lot of people hear mention of ‘Snake’ and immediately harken back to the tank-like Nokia phones that so many of us owned as mobile phones rose to take over our lives.  True tech OGs will instead remember it as one of the two games that shipped with MS-DOS as demos for the QBasic language.  In the early nineties if you were bored in a computer lab and had nothing but DOS 5 you probably spent a lot of hours throwing bananas and chasing your own tail long before Nokia brought Snake to the masses (Snake pre-dates the DOS version by over a decade, but thankfully I’m not old enough to have experienced Blockade).. 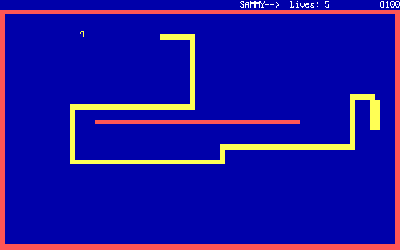 It seems unlikely that such a simple game concept has much more to offer against the competition of modern gaming, and if you did want a taste of nostalgia there are countless free versions of classic Snake on mobile app stores.  Doubters only need to part with a paltry $2.99 to be proven completely wrong with SNKRX.  I’m not sure how to pronounce the name.  “Snick-ricks”, “Snake-are-ex”, “Snake Prescription”?  I suppose it doesn’t matter, but let’s all agree it is a terrible name.

I will say immediately I do not recommend this game to anyone who had an intense love affair with Snake..  A Snake die-hard would probably be appalled the first time they hit a wall and bounce harmlessly off of it.  Running into your own tail is also no longer something you’ll worry about and instead of turns always being ninety degrees rotation is now fully analog.  This is not your <insert non-offensive ancestry name>’s Snake.

Like many auto-battlers and roguelikes the game is divided between the planning phase in the shop and the action phase as your carefully curated party of heroes battle it out.  As the player you are tasked with only turning the snake as it moves ever forward with varying speed based on your loadout.  As you do so waves of enemy blobs will spawn and use a variety of attacks from simple chase and ram mechanics to ranged and advanced physics-based attacks. 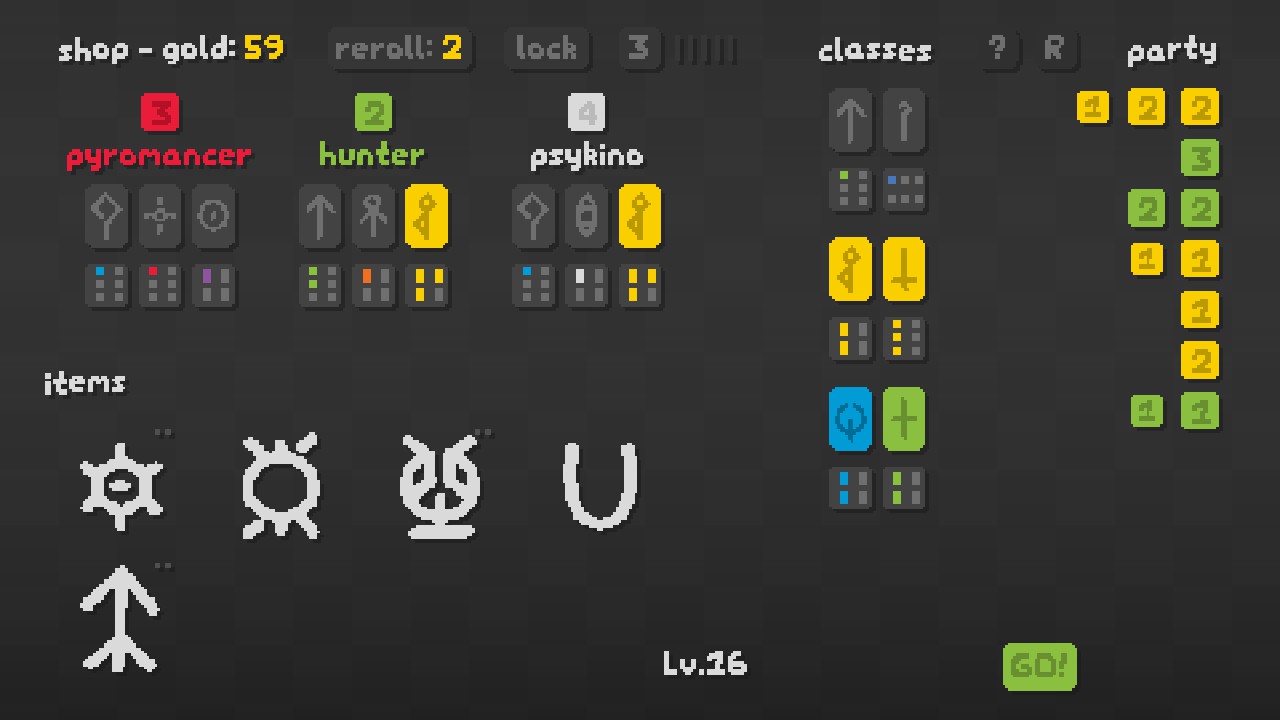 The shop boasts 40+ heroes to choose from as well as a class and synergy system to add depth.  I’ve had more than a few shower thoughts about possible build combinations.  The in-game economy is robust.  Gold saved between runs can gain interest and certain heroes can not only increase the interest rate but also cause gold to spawn on enemy death.  Rerolls are relatively cheap and a full refund system for your purchased heroes takes away some of the misery that other genre examples can cause when trying to build a predetermined loadout.  I have to say I’m definitely still in the discovery phase of the shop’s many secrets and really enjoying the process.  There are also artifacts to be collected after certain game stages that can have major effects on the run and can heavily influence the direction of a build. 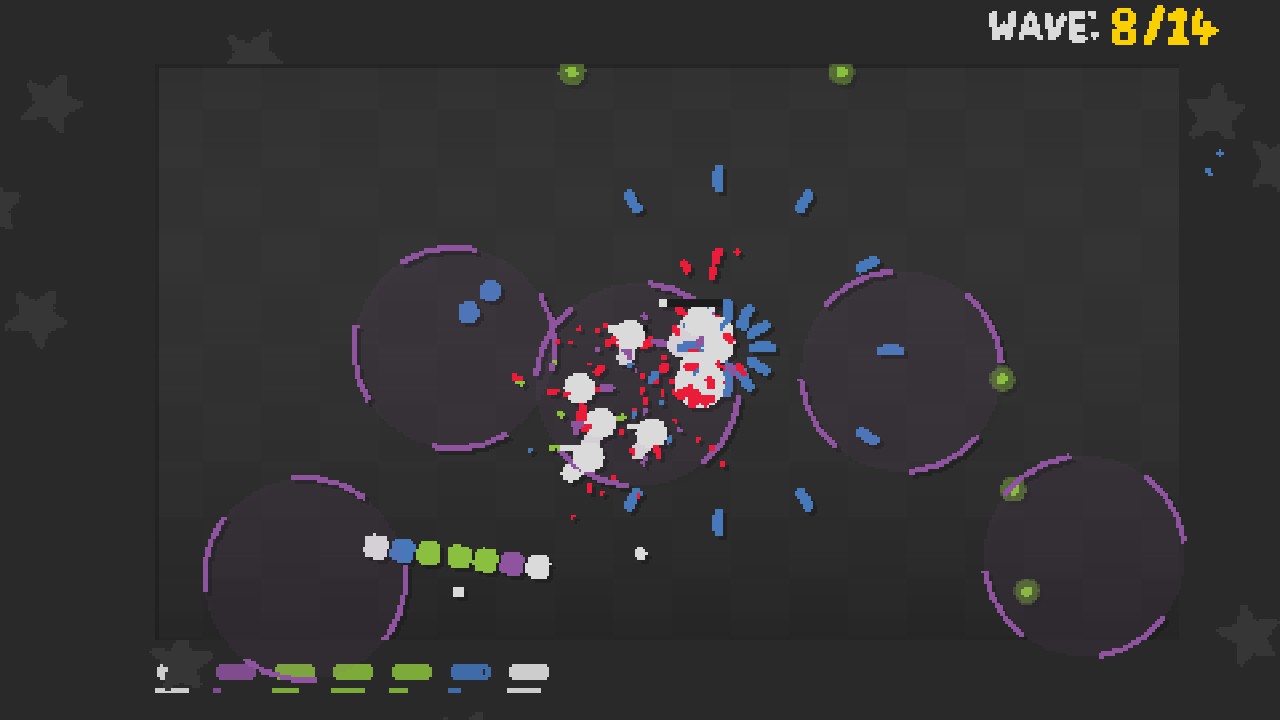 This fully fledged auto-battler roguelike is bolted on to the deceptively simple undulations of the titular low-res serpent but the real joy comes from the actual snake-handling and the star of the action phase is the physics system.  Unlike the Snake of old this one can (and will) take a few bumps.  Smashing straight into a crowd of blobs headfirst and sending them scattering is fun but not nearly as fun as tail-whipping a barrager across the map moments before their attack goes off.  I didn’t expect a game that looked this simple to let me interrupt enemy attacks with physics and the fact that it does is amazing.  Heroes also have different health and defense levels.  Deciding where on the snake to put your squishy mages versus your rugged warriors becomes a big part of the strategy.  Some heroes offer area of effect attacks within a radius of themselves, forcing you to get close for maximum damage and creating an exciting risk/reward situation.  A savvy player will also be carefully monitoring segment health and position as losing a powerful segment early on in a stage can be crippling.  Using the Snake as a weapon is basically spending hero health as a resource and trying to balance that risk/reward is great fun.

As far as criticisms, the most obvious is graphical fidelity.  The menus and fonts are ugly.  The game board is composed of solid colored blob shapes with no shading.  Most effects consist of more colored blobs but combined with some screen shake/flash.  There are some times when the simplicity of the visuals affects the gameplay.  The friendly turrets from the Engineer class look like orange blobs but so do the very dangerous enemies that can launch big physics collision attacks which can lead to confusion.  It can also be impossible to follow what’s going on in a really crowded board as things flash, shake and explode into a rainbow soup of violence.  That being said, there is a simple adorable quality to the visuals that somehow just works. 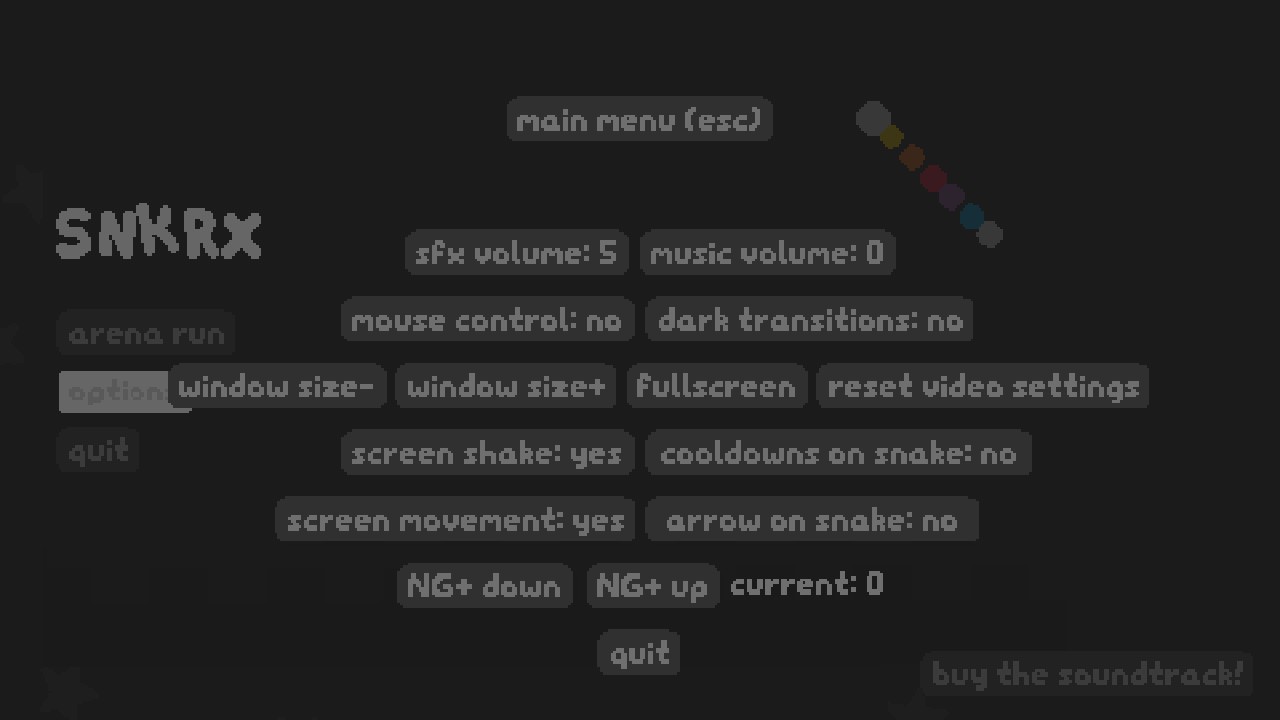 Indie games like this usually fall a little flat in the sound department but this one shines.  The music is great.  Not great enough to make me turn it back on instead of listening to podcasts while I pilot my snake, but still great.  What I really love are the menu and shop sounds.  It is all very subtle and satisfying as is the audio feedback on during the action phase..

While the numerous combinations of heroes and the initially steep difficulty of the game offer good value for the price tag, I did manage to beat the standard arena run in a few days.  I was delighted to find out the new game plus system not only enhances the difficulty but also adds a segment to the snake for each level.  I’m really looking forward to giant, synergy-dripping snakes plowing through even larger crowds of blobs.  I also expect that we’ll see a lot more added in terms of classes and game modes, although that’s pure speculation on my part.

My biggest complaint about SNKRX is the lack of information.  So much about the lovable snake segments is hidden from us.  How much more damage can a warrior actually take than a mage?  Exactly how long is the Juggernaut’s cooldown?  Sometimes it isn’t even clear what a hero does based on their shop description.  I realize this is a common conceit among roguelikes and many people love the discovery, but at least show us cooldown times or a DPS stat.  The game could do a lot more overall to explain things.  I didn’t learn till after finishing the standard arena mode that gold coins only spawn when certain heroes are present.  It is possible, especially with a longer Snake, to get caught right on top of a spawn point without enough time to take evasive maneuvers, which usually ends the run.  Those that have a distaste for merciless RNG might also find a lot of frustration with the reroll system.  All of these can be explained away as just par for the genre, but my biggest pet peeve is that the bosses can summon infinite waves of backup as you battle them and the waves continue after their death.  Builds that focus on slowly wearing down the enemy or spamming healing to survive are hard countered by the endless wave boss fights and this effectively negates a whole range of possible builds.  Dying to a basic red blob that spawned after I took down the boss in an epic battle that left me crippled happened far too often and represents 99% of the times I stopped having fun in this game.

In the past I’ve looked down on idle/auto games.  Admittedly they provide some endorphins and scratch some kind of emotional itch.  Especially if you work with programming on a regular basis you might get quite a bit of mileage out of the “If I can just get to this milestone I can make everything so much more efficient” feedback loop.  Personally, I’ve always ultimately gotten to a point where I questioned why I bothered with any of it in the first place.  Idle games, in hindsight, feel like exercises in futility.  While SNKRX hasn’t been out for that long I can confidently say that I haven’t reached that point in any of my runs.  No matter how luck-filled or catastrophic a run in SNKRX turns out to be, the gameplay of navigating the snake alongside the strategy of planning and arranging the heroes has kept me engaged and looking for one more round. 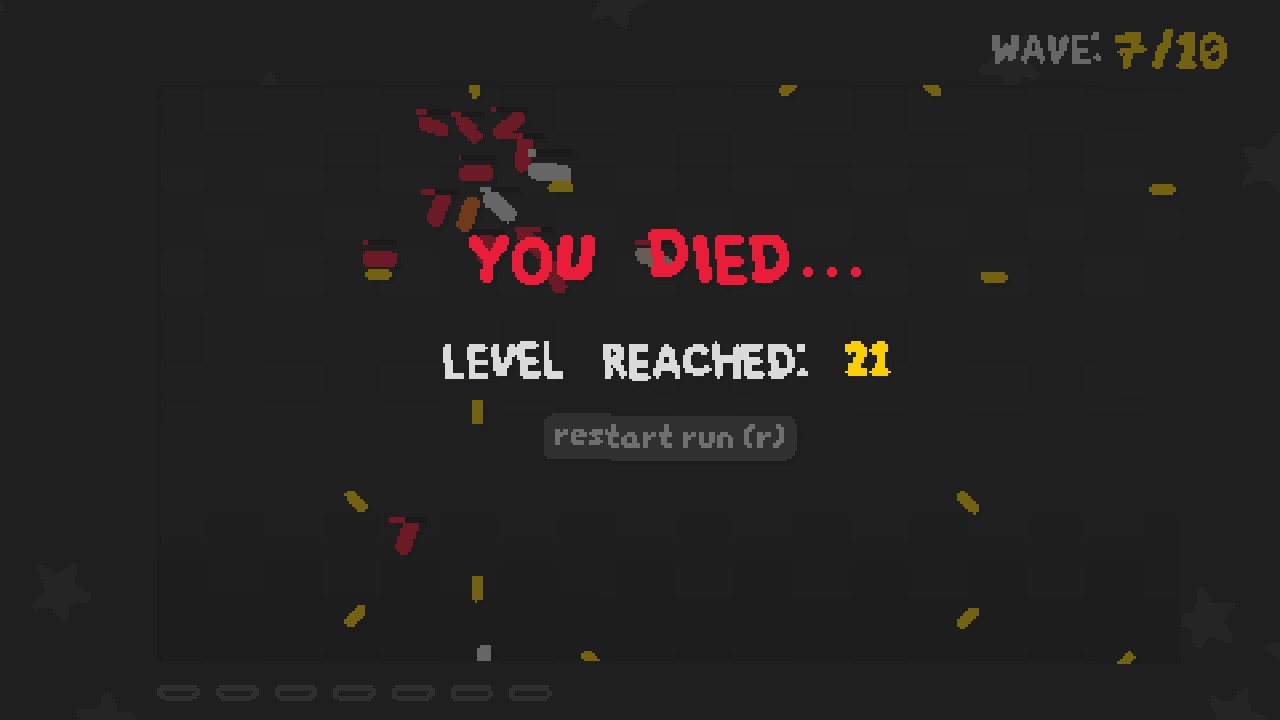 SNKRX started as a game jam type of thing but seems to have taken on a new life thanks to a great reception on Steam.  The updates seem frequent and several of my initial complaints about the fullscreen setup and UI have already been resolved.  Just in the past week the healing system was overhauled and some of the less impressive classes were re-imagined to great effect.  For those FOSS gatekeepers out there, the git repo is available but don’t do it just to avoid the meager $3 cost of admission.   Slither your scaly carcass over to the steam store and buy it.

Discuss on the Forums